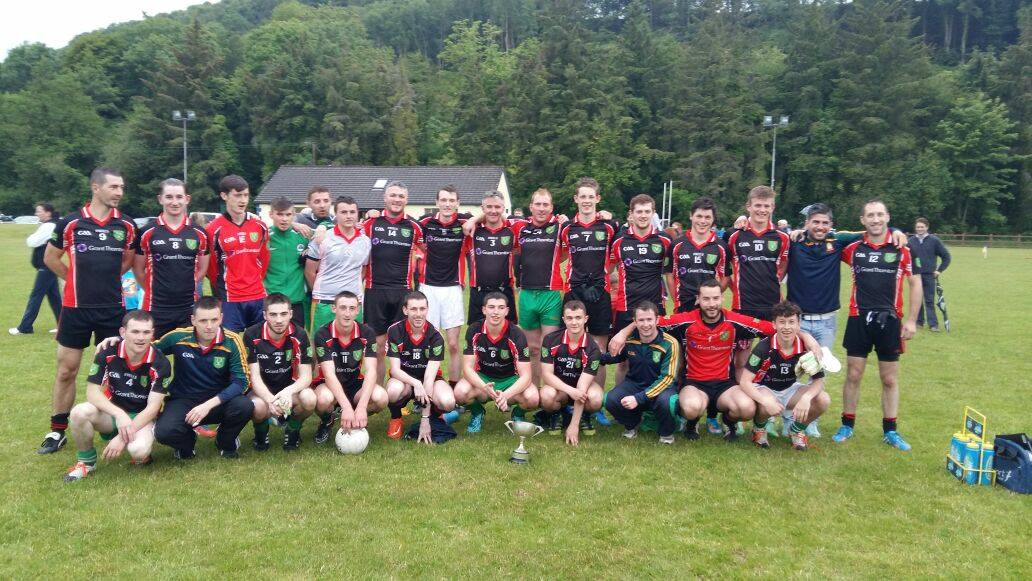 Estuary rivals Ballysteen and St Senans served up a thriller in the West Junior B League football final on Friday evening which was played at the St Senans home pitch in the Port town of Foynes. The Ballysteen team went back to Foynes, played some wonderful attacking football and claimed a classic smash and grab victory to prove that their 2014 West Junior B Championship win was no flash in the pan. This Ballysteen side is a serious outfit with the right mix of youth and experience and is well capable of challenging for county honours this year. Ballysteen were impressive but a gallant St Senans side made them fight all the way to the final whistle.

First Half
St Senans started off the match brightly with David Foley and Adam Kerins direct style causing problems for Ballysteen. Senol Yamac’s fancy footwork was also causing headaches for the Ballysteen backs and due to some confusion in the Ballysteen backline Owen Hartney had a goal with Adam Kerins scoring a couple of points in the first 10 minutes. Eamonn Murphy, Declan Somers and Enda Gallagher settled things down at the back for Ballysteen and the all action Declan Guerin kicked a great point off his left leg to get Ballysteens first score. Martin Fitzgerald kicked a point for St Senans but then Ballysteen hit a purple patch with Darragh Ranahan and John O’Shaughnessy leading the Senans defence on a merry dance. The balance and pace of these two players was a joy to behold as they got 7 points between them in the first half. Mark Murphy, Emmet Whelan and Declan Guerin kicked 3 more fantastic points for Ballysteen in the first half. The hard working half forwards, Mick Boyce and Chairman Alan Kehoe made life difficult for the St Senans half back line who could not get forward as often as they wanted. The movement of Corey Flynn at midfield linking up with the inside forwards caused all sorts of problems for the Senans defence in the first half. The score at half time was Ballysteen 0-11, St Senans 1-3.

Second Half
Ballysteen started the second half in the same mode as they ended the first half with Corey Flynn getting a goal and Declan Guerin kicking his third point of the night. The youthful Jamie O’ Sullivan attacking from half back had a long range shot go into the roof of the Senans net and he quickly added a point to leave Ballysteen up 12 points and looking unstoppable. The St Senans management of Eoin Kelly and Ber Enright had not read the script though and their attack bolstered by substitutes Darren Kavanagh, Mike Sillery and Paul Ryan hit back at Ballysteen in waves. Adam Kerins had a point while Kavanagh kicked a goal. John O’ Shaughnessy kicked a point for Ballysteen while Paul Ryan had a couple of points from frees for St Senans. Kavanagh kicked another great goal with just a few minutes left. St Senans attacked again and had a shot for goal just deflected wide for a 45. Ballysteen were leading by 4 points and living dangerously but captain and leader Alan O’Shaughnessy ably assisted by his cousin David Holland and goal keeper Ian Ranahan put their bodies on the line to keep out St Senans and add a fourth West Junior B football title to Ballysteens Roll of Honour. John McGrath blew the final whistle much to the delight of the Ballysteen supporters and to the relief of the management duo of Anthony Ryan and Cathal Anglim who have guided this Ballysteen teams meteoric rise. St Senans Gael, Mike Mullane presented the cup to Ballysteen captain Alan O’Shaughnesssy who thanked the St Senans team for a sporting game.
Players and supporters of both teams went to the nearby Kerry Bar for refreshments where John O’Shaughnessy was presented with the Man of the Match award.
Ballysteen now play Galtee Gaels in the County semi- final.