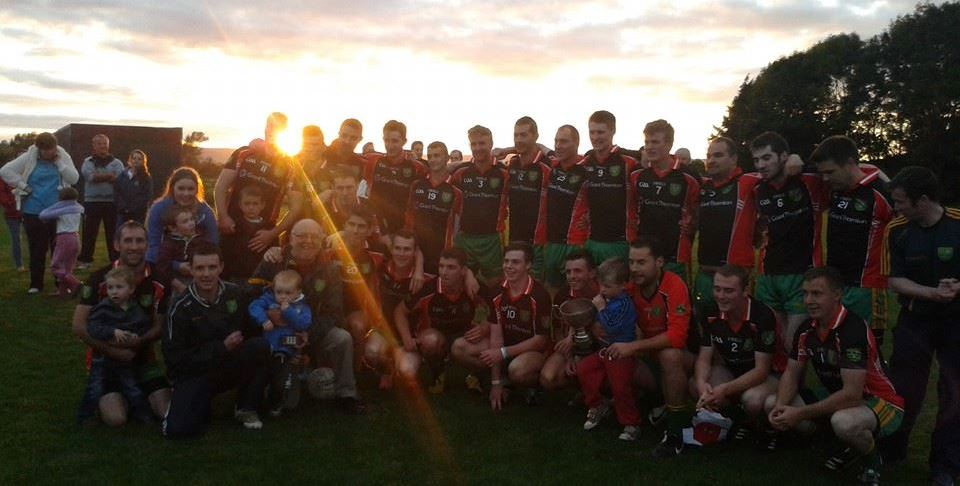 As the sun set on a glorious autumns evening in Cooleyroe, Ballysteen captain Ian Ranahan raising aloft the Dr Tom McCarthy cup was the last action of a fiercely contested West Junior B Football final. From the first minute of the previous weeks drawn game, until the last minute of the replay, our players showed grit, determination and no shortage of skill to eventually claim the prize they so richly deserved.

Both teams showed changes from the previous weeks encounter and it was Kierans who dominated the opening minutes of the game, rattling off two quick scores to lead 0-2 to 0-0 after 5 minutes. Once our lads settled into the game they caused serious problems for the St Kierans defence with a mixture of direct running and long ball into full forward Conor Barry who was giving the full back a torrid time.

Despite this dominance we failed to make it count on the scoreboard as we clocked up a number of wides before points from Jack Neville and Mark Murphy brought us level. Neville & Murphy then combined again in a key moment of the game. Gathering the ball on the right wing Neville embarked on a trademark solo run, a swift interchange of passes with Murphy saw Jack straight through on goal but just as he was about to shoot he was unceremoniously hauled to ground by a St Kierans midfielder. The referee had no hesitation in awarding a penalty and issuing a black card to the Kierans man. Unfortunately the St Kierans keeper produced an outstanding save to deny Mark Murphy from the penalty spot. This swung the pendulum back in the Saints favour and they kicked two more points before a Jack Neville free just before half time saw the teams go into the break with the minimum between them.

At the resumption Kierans again were quicker off the mark registering the first score of the half to see them lead 0-5 to 0-3. From this point on we once again began to exert our dominance on the game, and with Barry McMahon and Corey Flynn winning their respective midfield duels, we also began to improve the accuracy in front of goal. Conor Barry was first to step up with a super score, followed by 2 frees from Jack Neville who was by this stage running the St Kierans defence ragged. In the backs Declan Somers had got gotten to grips with St Kierans danger man Seamus Mangan, and Alan O’Shaughnessy was lording the center back position. Barry McMahon covered every blade of grass on the midfield and this endeavour was rewarded when he carried the ball 50 yards before clamly slotting the ball between the posts. A Kierans score interupted this scoring spree but another Mark Murphy point and free from Man of the Match Jack Neville saw us lead by 0-9 to 0-6 as the game edged into the final 10 minutes.

As we expected Kierans stayed fighting to the end and after cutting the gap to 2 they were handed a lifeline when were reduced to 14 men. From the resulting free they cut the deficit to the a single point and for the second week in a row they found themselves with an extra man for the closing stages. But as per the previous week our lads didn’t panic and produced yet another tremendous defensive display. Conor Enright, Eamonn Murphy and Mick Boyce completely bottled up the Kierans full forward line while Alan O’Shaughnessy, ably assisted by Enda Gallagher and Dec Somers, mopped up every break around the 45. Despite this heoric effort, with clock ticking into the 2nd minute of injury time Kierans finally managed to engineer a free, which they duely converted to tie the game up at 0-9 points each.

The game seemed destined for extra time, but cometh the hour, cometh the man and up stepped 17 year old Mick Boyce to produce a moment of brilliance worthy of winning any final. Intercepting the ball on his own 45, Mick embarked on a race against the clock, storming up the field, working a number of passes, then from a tight angle and with the hopes of a parish on his shoulders he took one look and sweetly struck the ball between the posts to seal a famous win for the Ballysteen.
This has been a fine achievement from a mainly young team where the majority of the players are still under the age of 21. Special thanks also to Selectors Cathal Anglim and Anthony Ryan who have also done such a great job over last few months. The side now can look forward to challenging for the county title with much confidence.