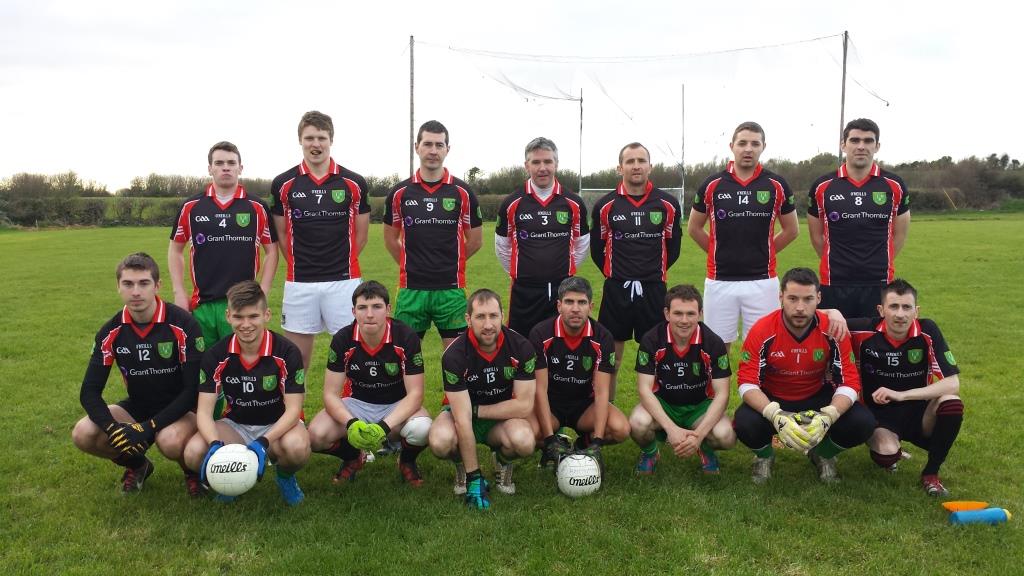 Ballysteen 5-13
Mountcollins 1-4
Our Junior B side booked their place in the West Junior B Football Quarter Final on Saturday night thanks to an emphatic victory over Mountcollins. Despite being minus a number of regulars Ballysteen started the game in fine fashion with a Mark Murphy pile driver of a goal setting the tone. We added further points from  Murphy, Mike Griffin and Pakie Neville before Anthony O’Shaughnessy added our second green flag to put us into a commanding lead. The lively Conor Barry then struck for our third goal with a neat finish in to the bottom corner. Jack Neville and Conor Barry then went on to add further points before half time to all but end the game as a contest. Mountcollins enjoyed their best period at the start of the second half and they finally beat Mike Murphy after he had previously denied them with a string of fine saves. However Ballysteen hit back with some fine scores from man of the match Mark Murphy and Anthony O’Shaughnessy before Pakie Neville netted a brace of goals to round off our biggest win for some time.
This is our second win from three championship outings and guarantees us a quarter final berth against either Knockaderry or Saint Senans in August. With over 30 players having seen action already this year for the B’s it is hoped we will have a strong panel available for the knockout stages and hopefully cause an upset or two.
Team: Mike Murphy,Brian Cassidy,Mick Boyce,Markum Fitzgerald,Mike Griffin0-1,Barry MacMahon,Anthony Ryan,Emmet Whelan,Corey Flynn,Jack Neville0-1,Mark Murphy1-5,Steven Carrig,Anthony O’Shaughnessy1-2,Conor Barry1-3,Pakie Neville2-1. Subs Used John Blackwell and Maurice Hayes