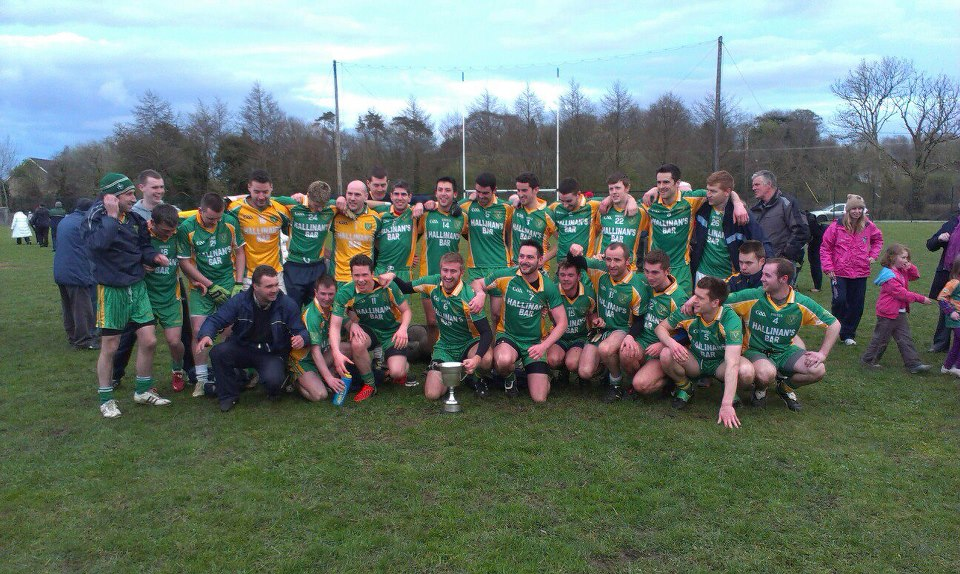 Ballysteen won the 2013 West Senior Football title after defeating Fr Casey’s at Foynes by 1-6 to 0-7.

Fr. Casey’s senior footballers travelled to Foynes last Saturday evening to take on Ballysteen in the West senior football final. In a repeat of the 2012 final, Fr. Casey’s were hoping for a similar result as they went in search of their 18th West Senior title.

Ballysteen who easily disposed of both Dromcollogher/Broadford and Sean/Finns on their way to the final were looking for revenge and there was little doubt that we had a great battle on our hands. Ballysteen settled the quickest and kicked two points in the opening five minutes to take an early lead. After weathering the early storm, Fr. Casey’s eventually found their feet and a point from Donagh Kelly followed by a brace of points from Robert Browne, one from a free put the men from Abbeyfeale into a one point lead.

There was very little to separate both teams, the game was been played at a high tempo and every ball was being contested. Just when it looked like Fr. Casey’s we were beginning to dominate, Ballysteen breached the Fr. Casey’s defence and riffled the ball into the top corner of the net from close range. Once again Fr. Casey’s were trailing but the team kept its nerve and gradually fought their way back into the game.

Firstly Padraig Browne reduced the margin to one point and then Robert Browne levelled proceedings. A point from Timmy Gleeson with five minutes left in the half then put the fealesiders back in front but Ballysteen converted a pointed free on the stroke of half time to leave the teams level at the break. The half time score was Fr. Casey’s 0-06, Ballysteen 1-03.

This game was anyone’s for the taking and we were about to witness another nail biting 30 minutes of football before the home of the west title could be decided. Fr. Casey’s emerged the strongest from the half time break and regained the lead with an early pointed free from Billy Quirke. That lead should have been increased but a mixture of poor passing and bad shot selection meant that Fr. Casey’s failed to stamp their authority despite camping in the Ballysteen half of the field. Credit must also be given to the Ballysteen defence however who stood firm and gave our forwards very few opportunities. Ballysteens reliance on crowding their defence and breaking on the counter act finally paid dividends midway through the half when they kicked a point from play to level the game once more.

Fr. Casey’s pressed for the winning score inside the final ten minutes but having committed numbers forward, our defence was left vulnerable and Ballysteen punished on the break, drawing and converting two frees late in the game to put them in the driving seat.

Fr. Casey’s never gave up and battled until the final whistle for that elusive goal that would salvage victory but it wasn’t to be our night. The final score was Fr. Casey’s 0-07, Ballysteen 1-06. It was bitterly disappointing to have lost in such a close contest. While we know that improvements must be made there is no doubt this team has plenty of ability and hopefully losing the west final can motivate everyone to strive for greater success in the county championship.

The next big game for our seniors is the May bank holiday weekend when we take on Dromcollogher/Broadford in the opening round of the count championship.